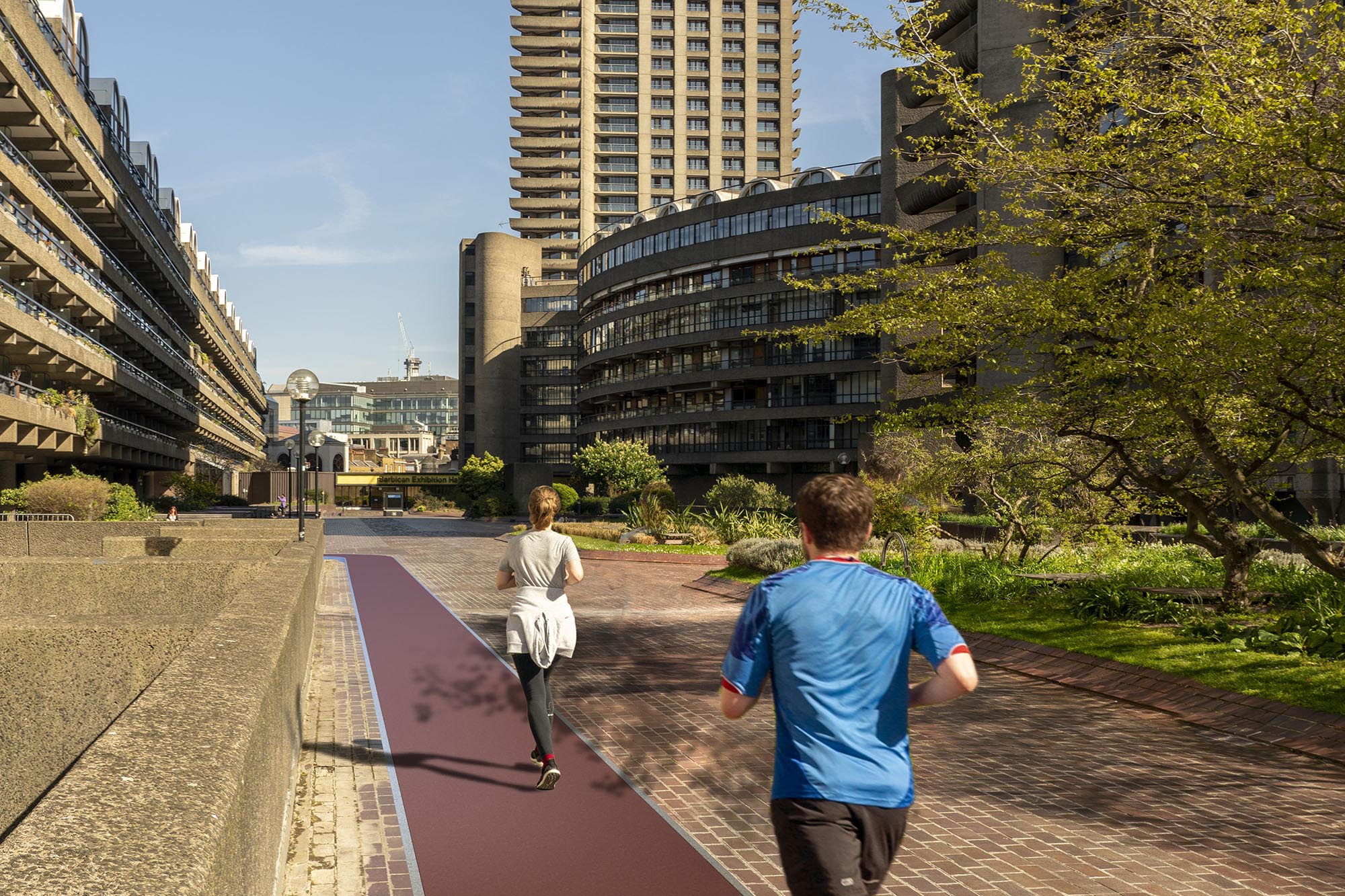 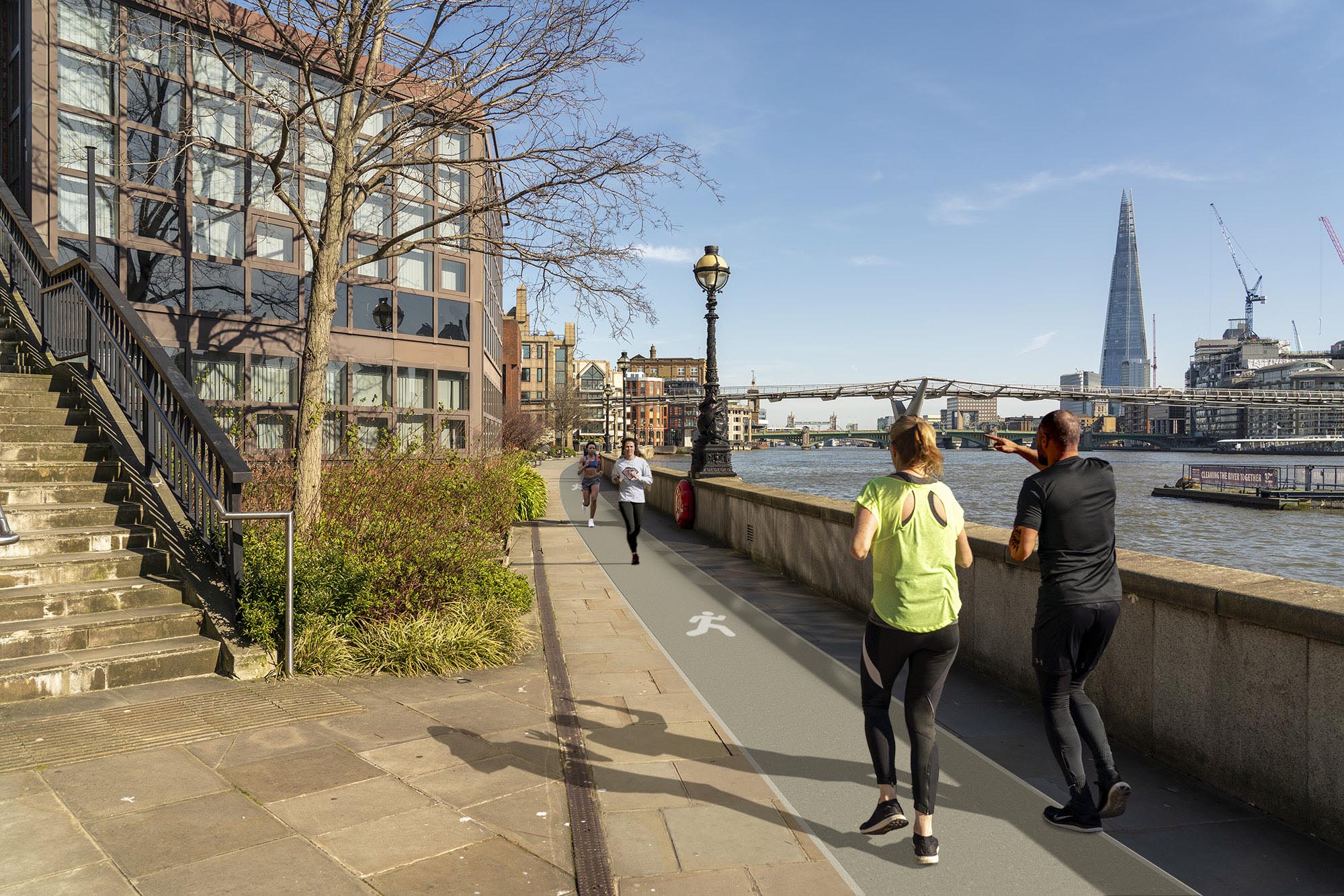 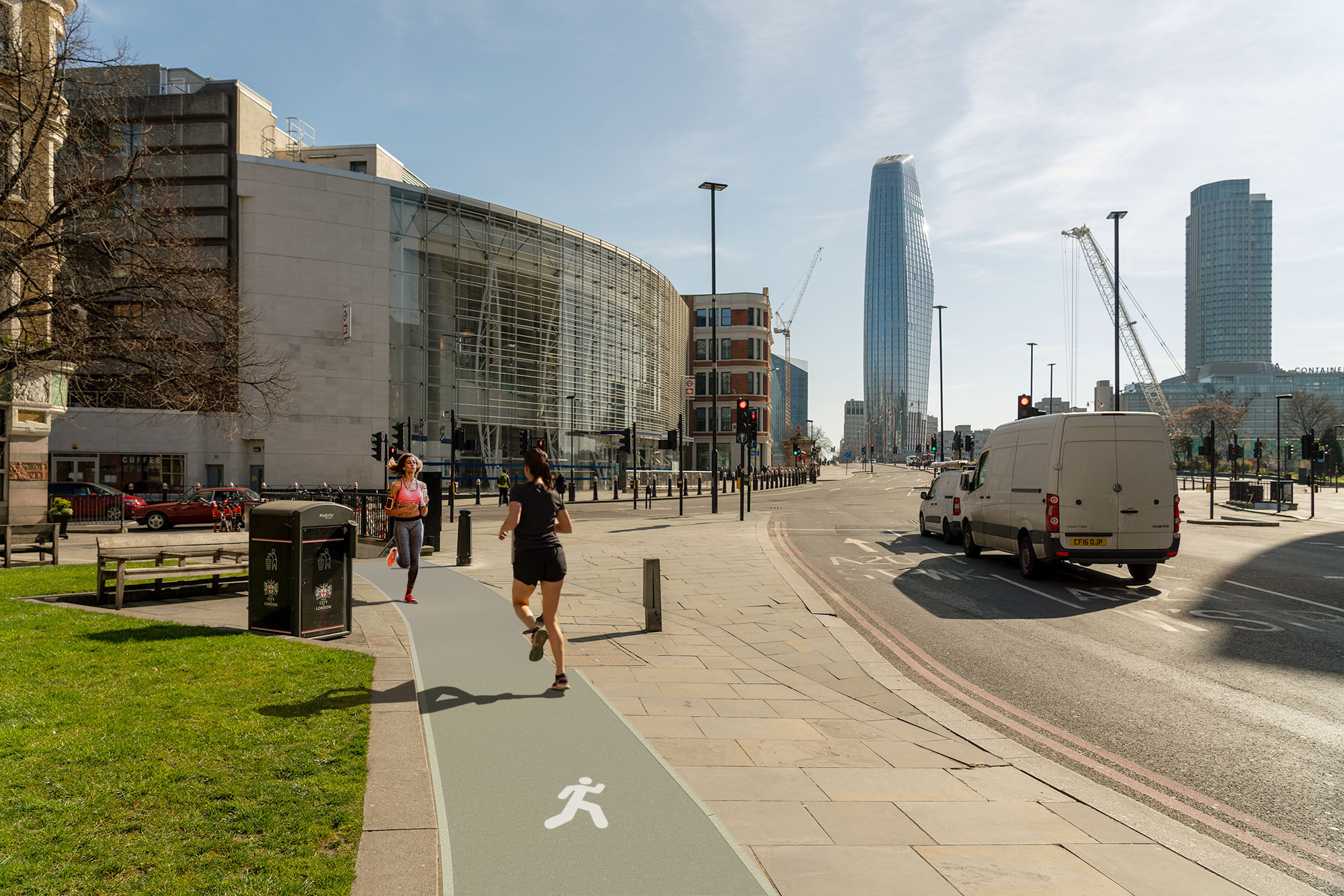 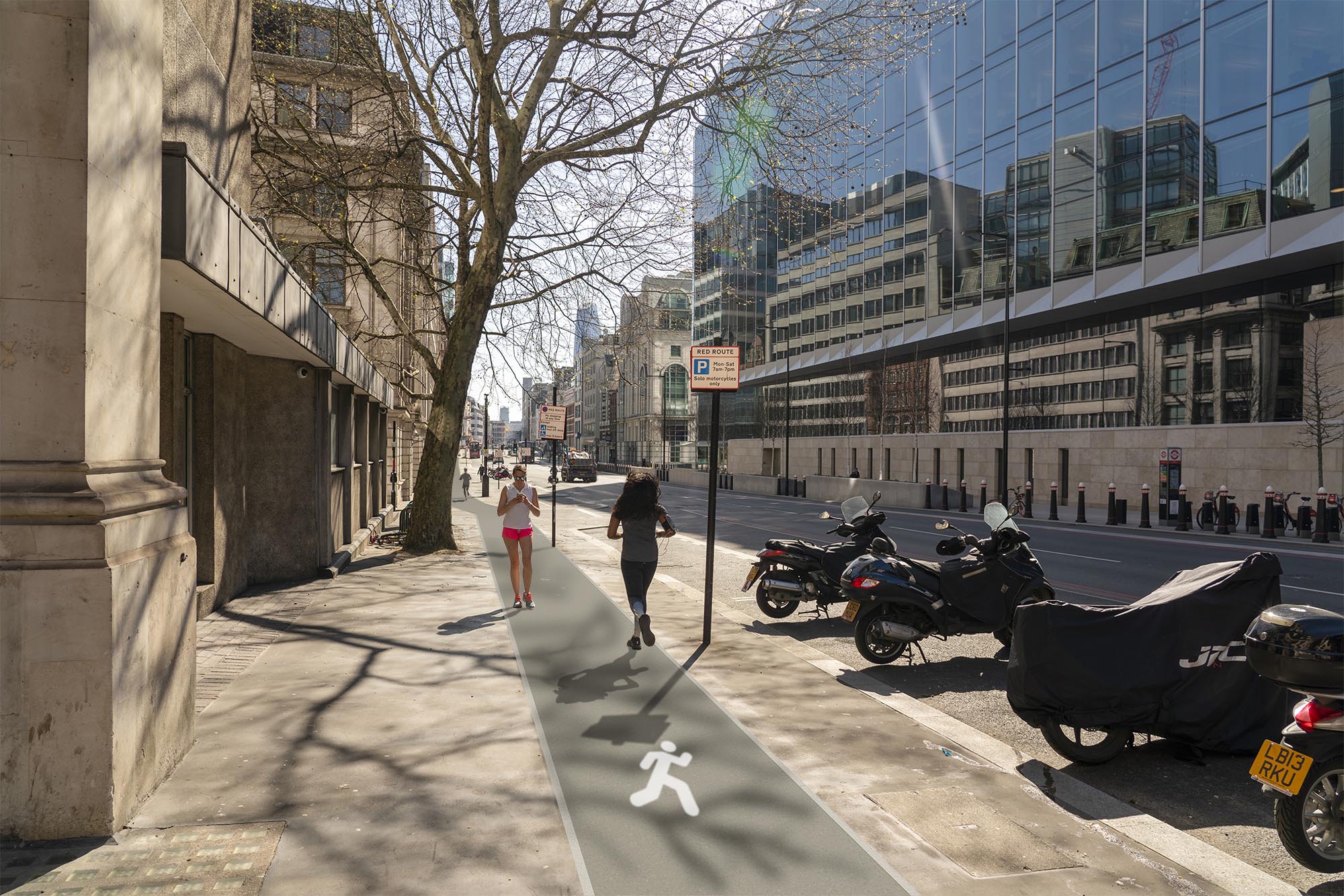 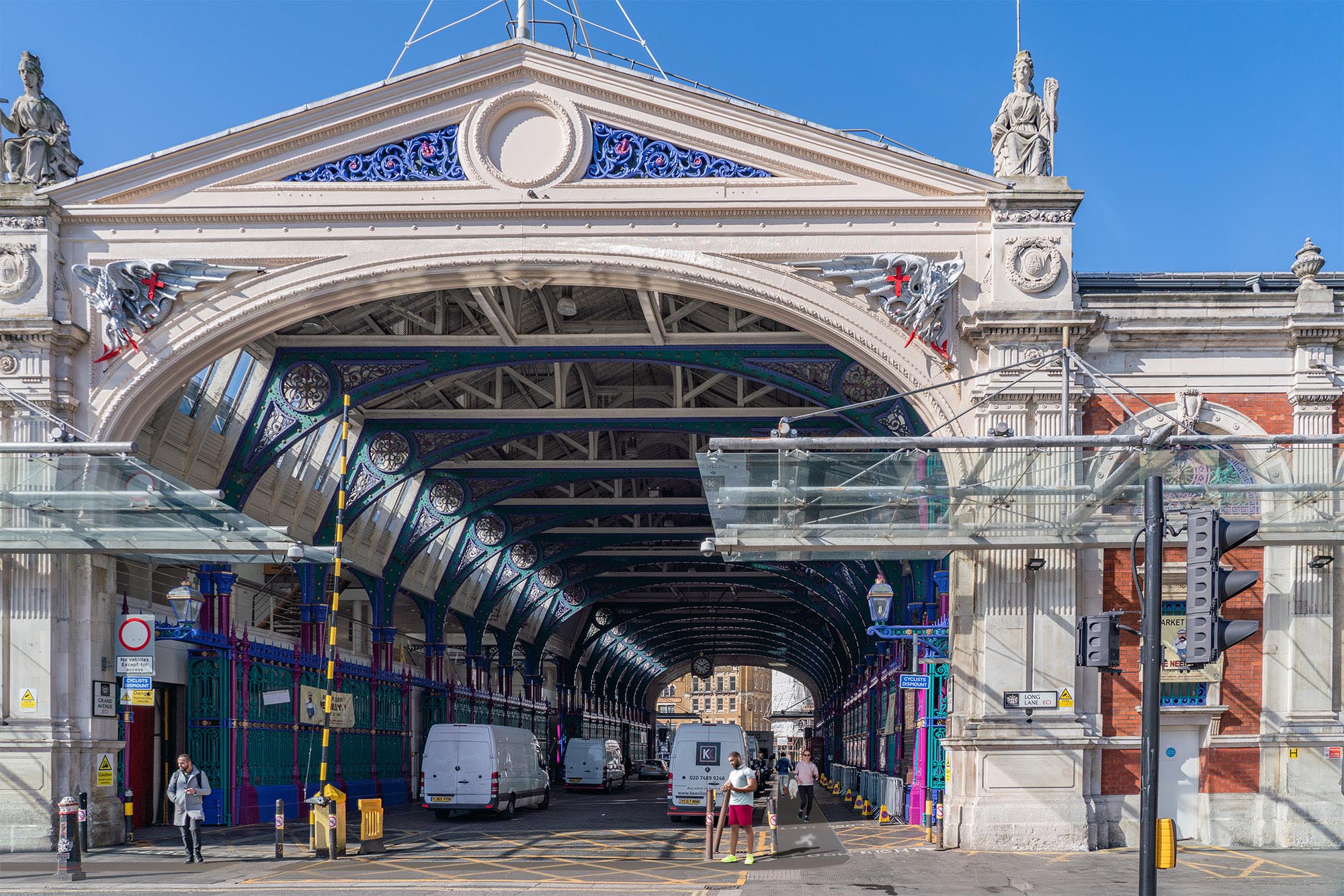 As part of its Draft Sports and Physical Activity Strategy, Members of the City of London Common Council are considering a proposal for a smooth, soft-surface, high-friction running track that will be embedded flush with the footway. For the first time a free outside sporting facility could be available to those who work, study, visit and live in the City, while retaining the use of all the footway surface for pedestrians. The ‘SquareMileTrack’ is a 4.2km circuit that links open spaces along the Thames riverside with the Beech Gardens on the Barbican Podium (the underutilized pedway (youtube on pedways) owned and maintained by City of London Corporation on behalf of the public) and St Paul’s Cathedral, and traverses most of Culture Mile.

At present there is an absence of free external sports facilities in the City outside of cycling, and the dedicated cycle lanes which primarily serve the needs of commuter cyclists. The Sports Strategy seeks to address this situation, providing the means for people to do 45-60 minutes of moderate-intensity activity a day as recommended by NHS to maintain a healthy body weight. The SquareMileTrack is one way to achieve this, promoting running and brisk walking in the City.

This website provides an overview of our ideas about the SquareMileTrack including its route, air quality, appearance, construction materials and cost, and provides an online form for interested people and businesses to provide feedback and to contribute their own ideas.

The virus has had a significant impact on all of us, and has strongly underlined the importance of healthy and active lifestyles as a key factor in our physical and mental health, and the quality of our lives. The benefits of running and brisk walking, at whatever age, are well documented and could include a reduction in the symptoms of depression and anxiety, improved cardiovascular health, and improved sleep. Those who are physically active have a 40-50% reduction in the number of days they are ill with acute respiratory infections, which is a major symptom of coronavirus. The importance of regular aerobic exercise, and the need for public facilities to facilitate this has been highlighted by the pandemic. City office workers who have been working from home for months will have had easy access to tarmac or countryside runs, and this plan for a soft-surface track near their office will be one factor that encourages their return, especially for people more comfortable with the anonymity of an outside run than a gym.

The SquareMileTrack is a 4.2km loop linking open spaces along the Thames riverside with the Beech Gardens and St Paul's Cathedral. It traverses most of Culture Mile, a vibrant arts and culture hub for the City from Farringdon to Moorgate, and passes the Barbican conservatory. The route has been developed with due regard for the safety of runners and walkers, and the avoidance of conflict with pedestrians and vehicle traffic, and passes two drinking water fountains and two Community Toilets. The route has also been designed with reference to existing plans for footway works, which will facilitate its construction with the minimum of additional disruption and cost.

The route is broken down into the following sections:

Current and planned pedestrianisation is indicated in green in the Route column, totalling 73% of the proposed route. The extent of planned footway works within the next decade are indicated in blue in the Distance column, with the works totalling 58% of the proposed route. This includes the new public realm associated with Blackfriars Tideway and the move of the Museum of London to Smithfield, footpath widening of Charterhouse Street, and the repair of the Podium above Beech Street at the Barbican. Upon completion of the Museum of London public realm West Smithfield will be pedestrian and there will be only 5 road crossings on the 4.2km loop.

Running or walking is one method to help reduce obesity, a social responsibility being transferred to borough councils from Public Health England. These forms of exercise are among the least expensive fitness activities for individuals and groups. However, we know that many people are discouraged from running on hard surfaces, particularly on uneven stone footpaths, kerbs and other trip hazards. Frequent running on the York stone footways that predominate in the Square Mile can lead to other health problems such as joint injuries and shin splints. The closest alternative soft-surface running location to the City are the dirt tracks circumnavigating the Royal Parks. St James's Park is more than 15 minutes travel time by public transport so impractical for many City workers whose time available is limited, and inconvenient when wet and muddy. A smooth, regular and clearly defined all-weather running surface has the potential to overcome such barriers and encourage more people to incorporate exercise into their daily lives. At a distance of 4.2km, the SquareMileTrack is suited to most runners and walkers, and is comparable to many initiatives such as the increasingly popular Couch to 5k, and the Saturday morning Parkrun which is also 5km.

A running track in the Square Mile will add to the many facilities provided by the City, which collectively make it an appealing location for businesses and their staff, as well as for local schools, residents and visitors. In considering the demand for and benefits of the project, Councillors have been looking at examples of urban running tracks at various locations to add to their experience of their own athletics track at Hampstead Heath. These include resin-coated tarmac ‘Fitness Tracks’ installed by Westminster Council in three Embankments Gardens, the Battersea Park Millenium Arena owned by Wandsworth Council, the rooftop running tracks at Old Street and Distaff Lane, EC4V 5JT on the new FT building and synthetic running tracks in Budapest, Dubai, Monaco and Moscow installed by UK company Conica.

This website includes further details of the SquareMileTrack proposal covering pedestrian congestion, air quality, aesthetics, cost and synthetic rubber versus York stone. As of 20th June 2020 there have been two news articles, one in the Evening Standard and the other in the Islington Tribune.

At present the SquareMileTrack is an idea, but it is an idea that has been enthusiastically received by Members of the City of London Common Council. The concept is supported by London recharged: Our Vision for London 2025, a City of London Corporation document published October 2020 as part of their plans for recovery from COVID-19. Quote from the infrastructure section: Develop London’s green arteries to enrich walking (and running) routes across the City. Transform the day to day life within the City and workplace to make going to work a place to become healthier.

The merits and location of a City running track needs consultation with local residents, students and businesses; and we very much want to hear what people think; whether they support the idea, have alternative suggestions or if they have concerns or objections.

Councillor John Edwards is coordinating this process. Please complete the survey which provides the opportunity for feedback and comment. You can also email him directly at john.edwards@cityoflondon.gov.uk if you do not wish to have your comments made public on this website. If there is a positive response, we will formally approach the Director of the Built Environment (Highway Operations) to determine the most appropriate and compliant way forward.

Note that while it is possible to submit a planning application for properties that are not owned by the submitter, the geographic area covered by the SquareMileTrack is considerable. There is a procedure and legislation for a community to create a single-issue Neighbourhood Forum that would lead to a referendum on the project, and this is a possibility given a running track in the City is consistent with the Draft City Plan 2036 as indicated by these extracts.

The authorship of all form entries and emailed responses will be held in the strictest confidence. We will provide on this website continuously updated results of the survey, including comments entered on the form, in order to keep members of the public fully informed of everyone's opinion of this SquareMileTrack proposal.